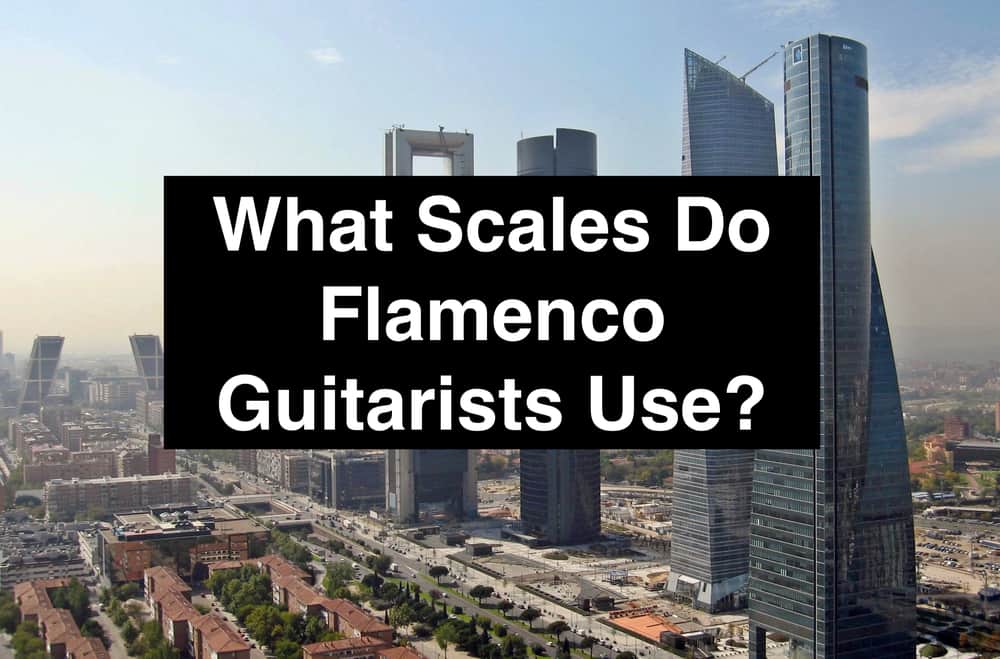 Flamenco guitar playing is probably one of the coolest ways to play the guitar on account of its unique sound and tonality. There really is no other genre that sounds quite like the flamenco style. In this article, we’re going to explore what are some of the most common guitar scales in flamenco guitar playing.

The most commonly used guitar scales used by flamenco players are the Phrygian Dominant, the Phrygian Mode, and the Harmonic Minor Scale.

Similar to the Major Scale, the Harmonic Minor Scale is the foundation for a ton of other scales, which often go by many different names. For instance, it’s not uncommon for people to refer to the Phrygian Dominant scale as the “Spanish Gypsy Scale,” even though it’s used in a ton of other genres other than “Spanish” music, like metal. Without further ado, let’s break down what these scales look like and how they’re created.

The Harmonic Scale is an important scale in music theory because of what I mentioned above: it’s the foundation for a ton of other scales and harmonies. Mark Sarnecki’s Complete Elementary Rudiments is a great book if you want to learn more (get the Answer book from Amazon as well).

In case you don’t know what a minor second is, don’t fret. A Minor Second interval is just a semi-tone, in other words, it’s one fret up or down from the original note.

For instance, the distance between the 2nd fret B on the A-string and the C on the 3rd fret of the A-string is a minor second. Think of the notorious sound from the Jaws movie where the giant shark is swimming up close to the boat. That’s a minor second. Anyway, the Harmonic Minor Scale is laid out for you in the image shown below:

Similar to the Major Scale, there are 7 different modes of the Harmonic Minor Scale, so depending on the tonal center of the scale, in other words, the note by which the rest of the scale revolves around, it creates a different sound.

The Modes and Chords of the Harmonic Minor Scale are the following:

For instance, the Locrian ♮ 6 is just what it sounds like. It’s the Locrian mode shape with a natural sixth degree.

The Locrian Mode looks like this on the guitar:

B Locrian, from key of C Major

So the Locrian ♮ 6th is just the Locrian mode shape with the sixth degree raised by a semi-tone.

This is what the Locrian ♮ 6th looks like:

So now that you have an idea of what the modes are on the Harmonic Minor scale, we’re ready to explore the fifth mode of the scale, which brings us to the Phrygian Dominant, also known as the Phrygian ♮ 3.

As I mentioned above, the Phrygian Dominant is the fifth mode of the Harmonic Minor Scale.

This is easily the most used mode of the Harmonic Minor Scale, and it’s all over many different genres, including Flamenco style, or Spanish-sounding music, metal, etc.

The Phrygian Dominant looks like what you can see in the image shown below:

In terms of what this scale sounds like, people like to say that it sounds a lot like Phrygian but a lot more evil, but it depends on how you go about using it.

It can sound dark and flavorful, however, it can also sound kind of mystical and cool.

The Phrygian mode, similar to the Phrygian Dominant, is just a mode of another scale. It’s the third mode of the Major Scale.

In other words, it’s the notes of a regular old Major Scale but starting on the third degree of the scale.

So, if you think of the C Major Scale, which are all the white keys of a piano starting from C and ending on C, the E Phrygian Mode are the same notes but just starting on E and ending on E.

With that said, and I’ll always make sure to say this, the aforementioned structure and pattern don’t necessarily make it a mode. In order to utilize its tonal qualities as a mode, the musical context and the tonal center of the mode have to be used.

Explained in a much simpler fashion, a mode is a musical context in which notes are played.

Most guitar players and musicians have used modes many times before without even knowing it. It’s not just a scale starting from a different note, it’s a musical backdrop, background, or musical context, whatever you want to call it.

This is actually what a mode is.

Regardless, the Phrygian Mode Shape looks like what the image shows below:

Important Things To Understand About Scales and Modes

Like I said in my article on rock guitar scales, In case you haven’t figured it out yet, the vast majority of scales out there are based on one foundational scale, but the order of the notes is switched around, which creates an entirely different sound and quality.

It’s really quite amazing that all you have to do is change the order of the notes to produce an entirely different sound and all scales are movable as well (my article on that).

And in my opinion, it makes things a lot less confusing, because once you memorize just three different scales, you basically have an idea of how to construct around 18 other scales from just three.

If you really want to put this knowledge to work, the best scales to learn are the following: the Major Scale, the Harmonic Minor Scale, and the Melodic Minor Scale.

The Major scale includes, within it, the Natural Minor scale, which is also called the Aeolian Mode, and then the Harmonic and Melodic Minor include six modes each that are the most commonly used scales in music today.

How Flamenco Guitarists Use Harmonic Minor, Phyrgian, And Phyrgian Dominant

With all that said, just playing the aforementioned scales and modes isn’t enough to get the flamenco-style sound that you’re looking for.

If you really want to channel the flamenco flavor, you’re best to practice the following tips.

How To Sound More Flamenco

1) Use A Nylon String Acoustic Guitar

If you’re reading this article, chances are that you’re wondering how to go about playing Flamenco guitar, which means you’re more than aware of what it sounds like to your ears.

Without a doubt, the Flamenco style is played on the Nylon String Acoustic Guitar, and that’s how you’re going to get that characteristic sound.

Sure, you can use the aforementioned scales and make it sound fantastic, but if you really want the sound, character, and timbre of flamenco, it’s best to use a nylon string. But rather than using one like what’s pictured above, I’d much rather get this LTD from zZounds.

Furthermore, most flamenco guitarists play with their fingers, rather than with a pick. Like what I mentioned above, you don’t have to follow these tips, but it’s going to bring you much closer to the traditional flamenco style and sound.

You could always take it another step further and grow your nails out on your picking hand, that way you can pluck the strings a lot easier.

All-in-all, I hope this was helpful to you. To be frank, I’m not a flamenco style guitarist, but I’m aware of what it sounds like and what some of the theory is behind the music, at least the harmonic theory, anyway.

If you want to hear flamenco-style playing, go to YouTube and look up Paco De Lucia. He’s arguably the most famous flamenco guitarist of all time, and his playing is tremendous, definitely one of the greatest players to ever live.